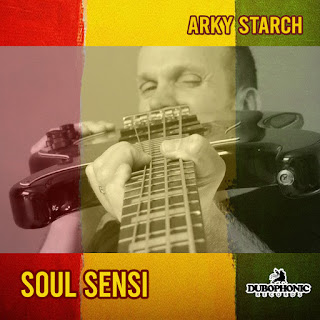 Born and raised in Belgium, Arky Starch is an exciting new talent. Being an accomplished bass guitar player (he also plays guitar and keyboard), he enjoys fusing Roots Reggae with variations on sounds, styles and genres.
His artistic journey began at a young age in 1994. Membership of various bands followed during his early years, before Starch had his big break: joining Gambian artist King Sillah’s Heartwash band. During the following four-years, he honed his skills as a bass player, but also as a musician – working alongside Timmy Mbonu, who was a long-standing collaborator with the late Nigerian artistic pioneer Fela Kuti. His influences have been broad and eclectic: Bob Marley & The Wailers, Lee ”Scratch” Perry, Dubmatix, Zion Train, The Pixies, Nirvana, Beastie Boys, Moby, Richie Spice, Sizzla, Capleton, Buju Banton, Collie Buddz, Sean Paul, Alpha Blondy and Stonebwoy.

“The focus on Jah is most important. Reggae music is a broad world and has many sounds. I tend to not stick to a certain sound, but follow my feeling as well - in the notes, structures, choice of instrument and sounds” says Arky.

Arky Starch’s debut album is entitled “Soul Sensi” and includes nine reggae tracks in a dub/dubwise style, every track having a different vibration. All tracks are composed and mixed by Arky Starch, while the mastering was done by Dubmatix at Renegade Studio. Nuff Respect! Special thanks also to Danny Elmes playing the guitar on “Original Kings” and Jerome "Serocee" Thompson singing on “Love 4 Da Street”. We hope you enjoy the vibes!