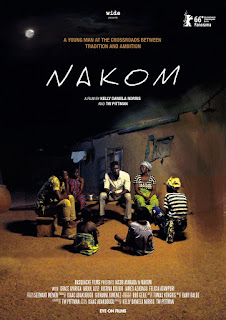 NAKOM is a film set in present day Ghana. It follows Iddrisu, a talented medical student, who returns to his home village of northern Ghana after his father's sudden death. Faced with a debt that could destroy his family, Iddrisu has no choice but to turn their farm and fortunes around. Over the course of a growing season, Iddrisu confronts both the tragedy and beauty of village life and must finally choose between two very different futures.

We were very proud, honored and of course full of joy, as we were contacted by the the film directors Kelly Daniela Norris and T. W. Pittman requesting our musical contribution with the track "Cumbia Fever" by Zion Dirty Sound, released on the compilation Celebrity Fever / Reworks and Dubs, which we of course did without second thought and without any financial compensation. Massive respect to all the NAKOM crew for this great cinematographic experience and of course Djibril and Faida for the great vibes they provide us through their music.

Watch a small scene from the film, with Zion Dirty Sound's music playing on the background. Soon come in a cinema theater in your country!