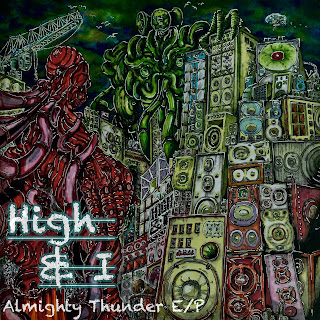 High & I is a dub and reggae project by the UK producer Chris Nottingham based in Middlesbrough. Before discovering the dub sound, High & I's roots stem from the D.I.Y punk scene as a drummer in an active Punk band and exploring some of the boundaries between what can be defined as music or noise. The project was established in 2019 after discovering the love for the soundsystem scene, its unifying message and the sheer force of the bass. High & I is also the founder of Teesside Dub Club, leading the dub revival in Middlesbrough.
The Almighty Thunder E.P is the first official EP from the High & I studios, featuring on two tracks Micky Sparra (Mickey Sparrow), vocalist of the UK punk band 'The Almighty Uprisers”, referencing to the producer’s musical background. Special thanks to Dub Cmd for the mastering.