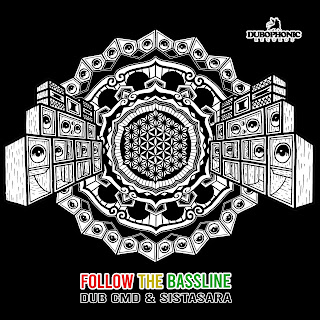 Being the most prolific producer of 2020, Dub Cmd is back with his third single. Debuting in 2019 with the EP Moonsteppa & the first collaboration EP Deeper Understanding with the Italian born producer & singer SistaSara, the UK based producer from Poland releases in 2020 a series of crucial vibrations: The 2-part EP Way To Zion ft. Sister Maki, the singles Leaving Babylon Behind ft. SistaSara and Blessed ft. Soul Fire  and the compilation Explorations In Dub Vol.2 / Lockdown Dub, in which he was actively involved as artist and executive producer.
Follow The Bassline is Dub Cmd’s new release and the last one in a series of three singles. Once again he collaborates with SistaSara  on a riddim presented in three versions, which has all ingredients that trademarked his heavyweight dub style: inspiring vocals, heavy basslines and deep steppa grooves.